Who Are You Calling Short?

I started shooting 22 Short ammunition from a Marlin bolt-action rifle almost 40 years ago, but even then the cartridge was already long in the tooth. In fact, it traces its history back to before the Civil War, and it’s likely the oldest cartridge still in use today.

In the early nineteenth century .22 rimfire cartridges were coming into vogue. Louis-Nicolas Flobert of France developed the BB Cap in 1845, a self-contained black powder cartridge that fired bullets of about 20 grains. In 1857 Smith & Wesson released its Model 1 revolver chambered in the then-new 22 Short cartridge, which was lengthened over Flobert’s version and stuffed with four grains of black powder. The original load called for a 20-grain conical waxed lead bullet at a muzzle velocity around 800 feet-per-second, which produced about 40-foot pounds of muzzle energy. Revolvers chambered in 22 Short were actually used for self-defense at the time, but that was not and never will be the cartridge’s mission.

Instead, it’s a quiet, mild-mannered plinking and varmint round, but perhaps the application that made the 22 Short most famous was its role as a “gallery gun.” Winchester’s 1890 slide-action rimfire rifle, which was designed by John Browning, was the preeminent firearm used at shooting galleries, and it was generally loaded with 22 Short ammunition. These guns broke a lot of balloons and won many prizes, but they did something else: They introduced an entire generation of American shooters to the sport. And with almost a million 1890 rifles manufactured by 1932, there’s no doubt that a sizable portion of shooters learned the ropes behind these rifles.

Sure, the 22 Short was eventually overshadowed by the 22 Long and 22 Long Rifle. The popularity of the 22 LR has certainly caused 22 Short sales to slacken, as has the advent of semi-auto designs which would not function properly with the anemic 22 Short. So, has this relic of a rimfire cartridge finally outlived its usefulness?

Not likely. The 22 Short is still a viable round, still fun to shoot, and it still serves several purposes. When I was a kid, the 22 Short was the cartridge of choice for those who hunted squirrels with a rimfire in my native Ohio. Unlike shotguns, which exploded the peace and stillness of the September woods, the 22 Short merely produced a mild crack. Many of the hunters I grew up with favored it because they believed squirrels wouldn’t react to the shot, perhaps thinking it was a branch breaking or some other natural noise. While I must say I doubt this is true, there’s little argument that the 22 Short disturbs game less than louder rimfires or shotguns.

There’s a cadre of hunters that still rely on the 22 Short today. It’s popular choice for raccoon hunters because it minimizes pelt damage and doesn’t have a loud report that could irritate landowners in the wee hours of a winter morning. Trappers like the 22 Short because it delivers a clean, killing strike to a furbearing animal without causing excessive damage to valuable hides.

Sadly, there aren’t as many houndsmen and trappers as a few decades ago, but the 22 Short still fills a niche. For those without suppressors, the quiet 22 Short is an excellent cartridge for introducing new shooters. This is, after all, the round that made gallery guns popular, and that’s because muzzle blast is minimal, and muzzle rise and recoil are negligible.

When I was young, I thought the 22 Short pretty light for big boar raccoons in full winter pelage, especially high in moonlit trees, and I still feel that’s true. However, it is an effective dispatcher of rodents and vermin. This was the role of “garden gun” that’s largely forgotten today, but as more creatures take up residence in our sheds, garages, and barns and make a feast of our garden vegetables and crops, the 22 Short still plays a role. It’s probably killed more corn crib and barn rats than any other round in history, and it’s suitable for just about any pest at moderate ranges. What’s more, you won’t irritate the neighbors with the sounds of your battle as you wage war on vermin around the house.

There are several options for those who like the cartridge. CCI offers five 22 Short loads, including a 29-grain lead target load, CB, and copper-plated round nose offerings with velocities ranging from 710 to 1,080 feet per second. There’s also a 27-grain copper plated hollow point which manages 1,105 fps, blisteringly fast for a 22 Short, and it would make an excellent round for stopping pesky rodents.

Ever run a track and field or 5K road race? Odds are that the starter’s gun was firing CCI 22 Short noise blanks.

So, is there still a place for the 22 Short? Absolutely. Sure, there are hotter, more modern rimfire loads, and its effectiveness as a game cartridge is indeed limited. But it’s impossible not to love this endearing little round, and so long as I’m still shooting, I’ll always keep a box or two of 22 Shorts close at hand.

At CCI, we keep the 22 Short going strong with ammunition options for plinking, pests and more. Check out our full selection of 22 Short ammunition. 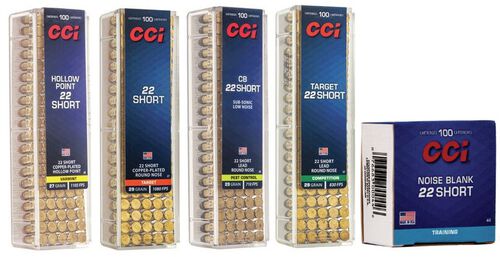