If you watch his YouTube channel, you’d think 22plinkster has been splitting cards and shooting aspirins off balloons since he was a kid. But you’d be wrong. As a boy, he wasn’t allowed to send lead downrange for fun. His father, an Army veteran and expert marksman, believed ammo was precious. With a one shot, one kill philosophy, the youngster was limited to shooting only at living, breathing creatures.

“We weren’t poor,” says 22plinkster, who goes by Dave Nash but keeps his true name under wraps. “Dad just believed ammo was precious. If I went out and shot five squirrels but missed five times, I wasn’t allowed to hunt for five days.”

The good thing: he didn’t miss much. Dave was a dead-eye with his father’s .22 Weatherby and learned to make every shot hit center bullseye. He made it his mission to make ethical shots on animals and to conserve his resources.

When he turned 21 and could start buying his own ammo, Dave started shooting to pass the time. That didn’t last long. Not because he wasn’t having a ball going through bricks of.22 ammo, but because his competitive drive took hold. He started working on his stance, trigger control, sight alignment and the like. He wanted to make every shot perfect and force himself to get better—and better he got. Today, he can pick up most any weapon, from a snub-nose revolver to a rifle from the 1950s and shoot it accurately.

So, just how did 22plinkster, a booming YouTube channel with more than 600,000 subscribers come to be? A simple dare, really. He had a buddy who told him he couldn’t hit a golf ball at 100 yards with a .22 rifle. He had just finished watching “Top Shot” with Dustin Ellermann, who had pulled off the feat.

Later that day, he set a golf ball on a tee and shot it at 100 yards with a .22 pistol. Being that Dave lives in Tennessee and his buddy in Florida, he needed a way to get him the video. YouTube was the answer, and viola, a shooting star was born.

Dave admits he had zero intention of creating another video. It was simply a fun way to win a bet. Still, he had to create a YouTube name to send the video, and 22plinkster was it. Days after sending the video to his buddy, he got a message.

“I had no idea what it was,” Dave recalls. “I got an email saying someone had commented on a video I made. I was confused. Then, I remembered the YouTube video. More comments and messages stared coming in. I was terrible on camera. I had no idea how YouTube or social media worked. It was just me and this one guy exchanging messages. He would ask me to attempt a shot and I would do it.”

The channel stared to grow. Dave was getting more subscribers and more interest. He was having fun making trick shots and getting more comfortable on camera. After about four months and putting up two unedited trick shot videos per week, he had 38 subscribers. Dave kept going and things started to explode. To date, he has been filming 22plinkster for 9 years. He has a full-time cameraman and has gone from filming on his cell phone to filming with the latest video and audio equipment.

Today, Dave wants to share a different side of shooting. He wants to show guns don’t always involve hunting or self-defense. Though he hunts like crazy, he strives to show people they can go to the range and have fun, and give newcomers the clear message that guns are not only not bad but fun. He wants to challenge people to shoot better—to play with fun shots. To be excellent.

“I’m blessed by God,” Dave says. “I love what I get to do and wouldn’t be able to do it without sponsors like CCI. It just wouldn’t be possible. This could all stop tomorrow, and if it does, I’m good with that. I’m just taking advantage of every moment. I’m wanting to help people with their shooting pursuits and keep pushing the limits.” 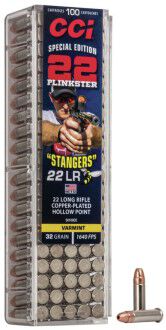 CCI Stingers have always been among of the top choices of YouTube shooting sensation 22plinkster. That's why we've introduced special-edition Stangers, loads named for his signature drawl.