The story of what’s arguably the world’s most popular all-around cartridge began—appropriately enough—in small stages. In 1845, Louis-Nicolas Flobert of France designed the first self-contained metallic cartridge, the 22 BB Cap. As the name suggests, this ancestor of all modern metallic cartridges fired a .22-caliber projectile of 18 or 20 grains, which was propelled by a priming compound in the rim of the cartridge. It was designed for parlor shooting, which consisted of firing pistols at targets inside the homes of wealthy individuals. Beyond this, the 22 BB had little practical use.

Then in 1857, Smith & Wesson released its Model 1 single-action pistol chambered for the then-new 22 Rimfire, which featured a case that was .421 inch long compared to .284 inch for the 22 BB Cap. The 22 Rimfire fired 29- or 30-grain bullets driven by 4 grains of black powder at velocities that topped 1,000 feet per second, making it a much more versatile cartridge for pest control and even home defense than the 22 BB Cap.

Another step came in 1871, when the 22 Long rimfire cartridge was introduced. It earned its name because it featured a .613-inch case that held an extra grain of black powder. Not surprisingly, the Long was viewed as more effective and versatile than the 22 Rimfire (which was eventually renamed the 22 Short to avoid confusion) for pest control, hunting, dispatching animals on traplines and defense.

Still, there were shooters who wanted more punch from a rimfire round, and they got what they wanted in 1887 when Stevens introduced the 22 Long Rifle.

The 22 Long Rifle, or 22 LR, uses the same .613-inch case as the 22 Long but generally uses a heavier bullet (usually 40 grains) and more powder. That recipe provided shooters with a rimfire round that was affordable to shoot yet suitable for hunting small game animals at reasonable ranges. Five or six generations of American shooters have started out with the mild-mannered 22 LR, and it remains the most popular cartridge in the world. It’s estimated the there are 2.5 billion 22 LR cartridges produced every year, and even that isn’t always enough to keep pace with demand.

One Round, Many Uses

There has never been a round chambered in so many different rifles, pistols and revolvers as the 22 LR. Brands like Smith & Wesson, Colt, Ruger, Taurus, Harrington & Richardson, and others have all made single- and double-action revolvers chambered in the cartridge, and most handgun manufacturers offer a semi-auto pistol.

These handguns are used primarily for recreational shooting and target practice, but there are also target 22 pistols that produce outstanding accuracy. In the mid-twentieth century, Smith & Wesson began offering its Model 41 pistol, which many people herald as the most accurate out-of-the-box 22 LR ever made. Ruger’s Mark I/II/III/IV pistols also have an outstanding reputation for accuracy, and though it’s a relatively recent addition, Smith & Wesson’s Victory line of pistols perform extremely well. Volquartsen 22 pistols are expensive, but they are among the finest available today and are capable of printing exceptional groups off the bench.

There are even more varieties of 22 LR rifles on the market, from single-shots to semi-autos, bolt-actions, pumps, and lever-guns. Single-shots cost around $200 and are perfect for new shooters because they produce mild muzzle blast and almost no recoil (the average 22 produces less than a half a foot-pound of recoil energy, which is essentially unnoticeable). There are several affordable 22 repeaters like the venerable 10/22 by Ruger. Like many other kids in my part of rural southern Ohio, I had a 10/22 which started out as a off-the-shelf wood-stocked carbine that I accessorized with a new stock, barrel, optics and trigger. I used that gun to dispatch groundhogs around the farm, and to hunt squirrels by day and raccoons at night with hounds, and I don’t recall a single failure to fire.

The 22 LR is oftentimes considered a short-range cartridge, but the growing popularity of competitions like NRL-22 is teaching the world that the cartridge can accomplish a lot more than most people think. Quality competition guns can shoot single-hole clusters at 50 yards, making today’s top competition 22s truly sophisticated arms.

It’s easy to see why the 22 LR is so popular. With lightweight rifles and handguns, it’s ideal for beginning shooters. The ammo is affordably priced, so it’s a great option for plinking and target shooting, and if you want to put your skills to the test, there are plenty of matches around the country. I hunt small game with a 22 LR bolt-action rifle with a suppressor, leaving little noise to damage hearing or scare game. Pelt and meat damage is minimal, and an accurate rifle with quality ammunition can dispatch game up to the size of woodchucks at moderate ranges. Regardless of the application, the 22 LR deserves its top spot among all metallic cartridges.

CCI® Stinger® isn’t just a great load for pinning down varmints. It’s also been one of the top choices of YouTube shooting sensation 22plinkster. That’s why we’ve introduced special-edition “Stangers”—loads named for his signature drawl. Like the original, Stangers’ 32-grain copper-plated hollow-point bullet leaves the muzzle at 1,640 fps and provide CCI’s legendary precision and accuracy. 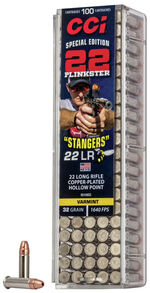