They’re everywhere—from the biggest cities to the most remote corners of the country, and their numbers grow every day. But raccoons are nest-robbing bandits that hit upland, waterfowl and turkey nests hard. Here’s everything you need to know about raccoons, their habits and how to target them—whether it’s to put more gamebirds in the field or meat on the table.

The raccoon is easily recognized, partly because of its distinctive gait, black mask and ringed tail, but also because the species is found in almost every habitat across the country. Procyon lotor, as the species is known to science, is at home in forests and marshes, mountains and semi-deserts. It’s also at home in urban settings, pilfering trash and robbing bird feeders to make ends meet. At one time the raccoon was found strictly in North America, but during the nineteenth and twentieth centuries, the species was introduced to Russia, Japan, Germany, and other parts of Europe and Asia.

There are dozens of raccoon subspecies across the United States, but apart from populations in the Florida Keys that are smaller and lighter in color, most raccoons look remarkably similar. The largest weigh over 50 pounds, but the average is less than that with boars (males) weighing less than 20 pounds.

Devastate varmints or drill targets at long range with CCI® VNT™. The loads feature a Speer® bullet with an extremely thin jacket and polymer tip that team up to offer flat trajectories, superb long-range accuracy and explosive terminal performance on impact. It’s the perfect combination for hunting varmints or shooting at the range. 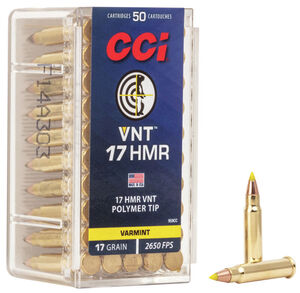 Their name is derived from the Powhatan language and means “one that washes/scratches with its hands.” In both its native and introduced ranges, raccoons are notorious nest robbers. Historically, raccoon populations in North America have been held in check by their value as a furbearer, but since the fur market is at a record low (an extra-large raccoon pelt fetches about a dollar in most markets, and XXL hides will bring $2) fewer hunters and trappers actively target them. This, combined with urban and suburban expansion has caused raccoon populations to reach all-time highs. From 1930 to 1980, raccoon populations increased by as much as 20 times, and today there are 5 to 10 million raccoons in the United States.

This population trend is particularly problematic for ground-nesting birds like wild turkeys, quail, pheasant and waterfowl, which are particularly at-risk because they prefer to nest close to water, a favorite raccoon hunting ground. In many areas raccoons are the primary nest predator.

The realization that raccoon populations are exploding and that they feed heavily on bird eggs has led some private landowners to prioritize raccoon removal. Additionally, raccoons damage agricultural crops, take up residence in outbuildings, and rifle through trash, so there are a growing number of hunters who want them removed.

But how? Traditionally, raccoons have been hunted with hounds, which pursue the animals and tree them. However, hunting raccoons with dogs is not always a viable solution since many problem raccoons are found in areas where releasing a pack of hounds that may run a half mile in the middle of the night isn’t feasible. Trapping is another option, but reduced fur prices have reduced the number of trappers. Live traps will work, but raccoons are exceedingly smart and quickly learn how to outwit these traps.

Perhaps the best solution outside urban areas is calling or baiting raccoons at night. Raccoons are vocal mammals that make a variety of screeches, growls and purrs. The sound of a squalling raccoon will draw the animal’s attention, thinking that one of its own kind is engaged in a fight over food. Raccoons also respond to distress calls of animals, so they can be harvested in much the same manner as foxes and coyotes using an electronic call.

Baiting is another option, and raccoons respond readily to baits like sardines and peanuts. Where baiting deer is legal, hunters know raccoons take a considerable portion of their corn pile, and there are few deer hunters with trail cameras over corn who don’t have reams of photos of raccoons devouring their offering. 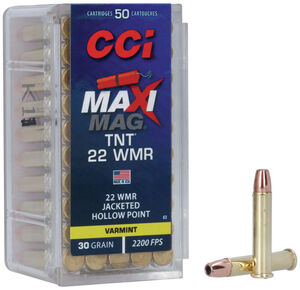 The traditional method of hunting raccoons is to use hounds, and of the seven recognized coonhound breeds, six were originally bred in this country to tree raccoons. The seventh, the Plott hound, is descended from German Hanoverian hounds and was imported to North Carolina by Johannes Plott for the purpose of bear hunting. While hunting for the fur market has decreased, the popularity of competition hound hunts for raccoons is at an all-time high. According to United Kennel Club Vice President Todd Kellam, the breed registry hosted 4,500 sanctioned competition hunts last year, and with purses in the thousands of dollars, a well-bred, well-trained coonhound is worth a great deal of money.

Growing up with hounds, I hunted raccoons exclusively with a 22 LR rifle loaded with copper-plated bullets, and while I believe 22 LR works fine under most circumstances, I’ve switched to a more potent rimfire for calling and baiting. My personal favorite is my 22 WMR bolt-action rifle loaded with CCI’s 40-grain Maxi-Mag HP ammunition. With a muzzle velocity of 1,875 fps the Maxi-Mag HP carries 220 foot-pounds of energy at 50 yards, which is ample for quickly dispatching even the largest raccoon without causing excess pelt or meat damage. The 17 HMR is another outstanding option, and when loaded with CCI’s 17-grain V-Max or TNT bullets at 2,550 fps these rounds shoot flat, kill cleanly, and offer minimal muzzle blast and recoil.

Good optics are key. I like a mid-range variable scope, something in the 3-9x range, though I’ve used red dot optics with some success. Since most hunting is done at night a light is also valuable, but if you don’t mind the added cost a thermal optic is probably the best option. I’ve also started shooting almost all my rifles with suppressors, and I think it’s a great idea for hunting raccoons since many suppressors reduce noise to hearing-safe levels. Minimal report is also less likely to alert other raccoons in the area.

There are those for whom the thought of eating raccoon is unimaginable. And while the “trash panda,” might never appear alongside duck pate and fondant potatoes at a Michelin starred restaurant, raccoon is actually pretty good. I know: I’ve eaten both baked and barbecued raccoon, and so long as the meat is cooked properly (and internal temperature is high enough to kill any parasites or bacteria) and the animal isn’t old and tough, raccoon is something of a delicacy. It has texture and even taste that is closer to pork than beef or chicken.

Whether you’re hunting raccoons to help protect ground-nesting birds, for the table, or simply for fun, you’ll find that these familiar predators are both abundant and clever. They learn to avoid danger quickly and can be quite frustrating to pursue. But the challenge is part of the fun, and with millions of raccoons in our backyards, it doesn’t appear the species will be going anywhere soon.