Several years ago, I spent time coaching 4-H shooting sports and assisting with concealed carry classes. One of my primary takeaways was that most new shooters, regardless of age, gender or size, are intimidated by centerfire firearms. Muzzle flip and recoil are especially jarring to a rookie shooter, and most first-timers don’t appreciate how loud a centerfire firearm can be (even when wearing hearing protection).

Asking a new shooter to learn all the nuances of the sport while operating a semi-auto centerfire handgun is the equivalent of asking a teenager to learn to drive on the Autobahn. It’s more difficult to master a new skill like shooting or driving when you’re distracted and anxious, and the truth is that even as an experienced shooter, the recoil of muzzle blast generated by some subcompact centerfire pistols with hot defensive loads can be off-putting.

Rimfire guns are the solution: 22 Long Rifle ammunition produces a mild report and minimal muzzle blast, even when fired from a short-barreled handgun. The 17 HMR and 22 WMR also reduce noise and recoil, though not to quite as low as 22 LR levels. That’s why the 22 LR has been the first gun for many shooters—myself included. Rimfires allow new shooters to focus on mastering the motor skills required to shoot a firearm without the distraction of increased noise and muzzle flip. And, perhaps most importantly, new shooters will learn to like the sport when they start out with a rimfire.

Inexperienced shooters who are intimidated by their firearms pose a threat on the range, too, since they devote so much of their mental focus on the gun in anticipation of the shot. As with distracted drivers, distracted shooters pose a risk to everyone around them because they haven’t dedicated their mental focus to the important task at hand. For that reason alone I prefer to start all new shooters with rimfire guns. Because rookie shooters devote less of their mental energy to avoiding the discomfort of shooting, they can instead focus on the important safety rules like keeping the muzzle pointed in a safe direction and indexing their finger.

Today’s rimfire handguns so closely mimic centerfire in some cases that the two firearms are nearly indistinguishable, making the transition between .22 and centerfire fast and seamless. Glock’s G44, for example, is a virtual clone of the company’s G19 9mm Luger with the same controls, sights and dimensions, so someone who has trained on a G44 will have no trouble operating the centerfire version. Browning’s 1911-22 semi-auto handguns are doppelgangers of the company’s 1911-380, and Taurus, Smith & Wesson and Ruger all make revolvers in .22 that mimic the form and design of their centerfire revolvers. Likewise, you can find rimfire rifles that are mechanically similar to centerfire lever actions, bolt actions, and ARs, so when a beginning shooter decides to step up to centerfires, they already have the basic mechanical procedures for operating them.

Starting new shooters off with rimfire guns helps prevent bad habits from forming in the first place, too. Virtually every shooter, regardless of skill set, flinches (even imperceptibly) when firing: It’s our body’s natural response to being struck or to loud, unpleasant noises. When new shooters are firing guns that are loud and generate recoil they’ll develop a more pronounced flinch more quickly. But flinching isn’t the only issue that recoil causes. Poor trigger control, “muzzling” the gun down in anticipation of recoil, poor target focus, are all byproducts of hard-kicking, loud guns. A 22 LR, by contrast, allows new shooters to be more confident and achieve success quickly. They’ll shoot more accurately, shoot more often and learn to operate the firearm in a safer manner when they aren’t distracted.

Paper targets serve a practical purpose, but it’s more fun to shoot reactive targets. Reactive targets for rimfire ammunition can be as simple as balloons but you can also buy relatively inexpensive steel plates or spinners, wobble targets and more. New shooters will enjoy this, too, and while they’re having fun they’ll reinforce the skills they need to be an accomplished and confident shooter.

Rimfire firearms are also an affordable option. Ruger’s Wrangler ($269), Taurus’ TX22 ($316) and Mossberg’s Blaze 22 rifle ($224) are all great values, and when you combine this cost savings with the relatively low price of rimfire ammunition you can see why the 22 LR is a natural choice for new shooters.

There’s a misconception that rimfires are “beginner” guns that are only suitable for neophyte shooters, but that’s not true. Unless I’m really pressed for time, I always take a rimfire to the range when evaluating other guns. Centerfire rifles, especially those with pencil-thin barrels, tend to heat up very quickly and lose accuracy. After shooting a three-shot group with a centerfire rifle I allow the barrel to cool completely, which usually takes about 15 minutes, and I fill the downtime by shooting spinning targets and wobble targets, all while improving my shooting skills.

Rimfire guns expose bad habits a shooter has developed, habits that might otherwise be masked by the noise and recoil from a centerfire. These can include an improper trigger pull, flinching, losing sight picture and more. By training with a rimfire and focusing on skills related to accurate shooting (breathing, trigger control, sight picture, head/neck/body position) you can develop a routine that becomes second nature in the field. When you transition to a centerfire gun you then follow the same exact routine—same breathing pattern, same body position, and so forth. By developing this routine with your rimfire on the range and following it with your centerfire in the field you’ll improve your shooting almost immediately.

Young or old, new or experienced, any shooter is going to enjoy and benefit from shooting a rimfire firearm. You’re not only building (or reinforcing) important skill sets when you head to the range but you’re also having fun, and that’s what makes most new shooters stick with the sport. Rimfires have always been the best option for teaching the basic tenets of shooting, but no matter your skill level there are few things more fun than a day spent plinking. 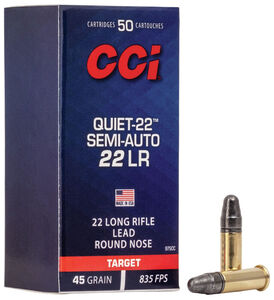